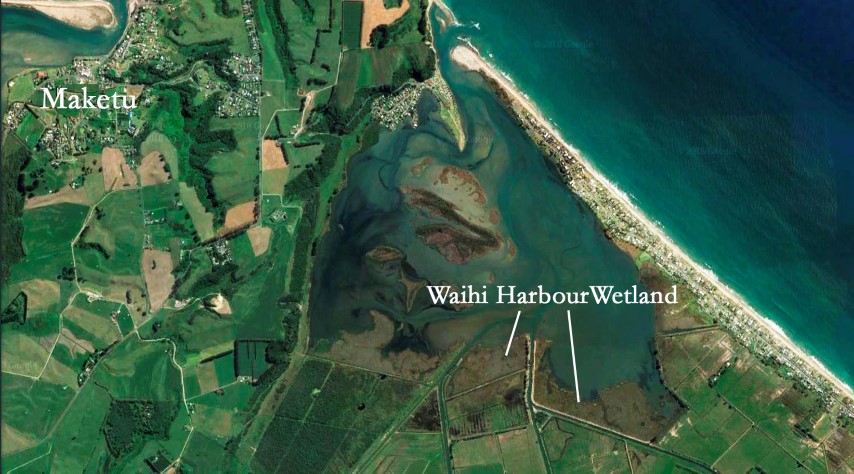 The Waihi Harbour Wildlife Management Reserve, is a 45ha DOC reserve on the south side of Waihi Harbour. Much of the reserve lies between the Pongakawa Stream in the east, and the Wharere Canal and Kaikokopu Canal in the west.

The project started in January 2015 when we obtained some funding from the BOPRC Environmental Enhancement Fund. Access into the reserve was severely restricted, with huge amounts of pampas blocking the western stop bank and the causeway, along with other problems such as wattle trees, gorse and blackberry. The funding enabled us to hire a digger to remove as much of the pampas as we could, making access possible.

Since then we have worked to grass over much of the causeway and the stop banks to prevent weed invasion. We have removed around 20 wattle trees, and the rest will be taken out gradually as native trees regenerate. In August 2015 we held a working bee, attended mainly by DOC staff, and planted 500 plants. These have survived well, and we have been gradually adding to them each year.

We have carried out a helicopter spray of the pampas and other grasses in the previously farmed area, and will continue to control these and other pest plants in the reserve.

At the end of 2015 we instigated a trapping program which continues to catch invasive mammals such as rats and ferrets, giving the native birds a better chance of rearing their chicks.

The reserve is home to Australasian Bittern, Banded Rail, Spotless Crake and Pied Stilt, all of which breed there, as do Australasian Shoveler and mallard. It is also frequented by the flock of Royal Spoonbill that are often seen the Maketu/Waihi harbours.

In October 2016 two rescued bittern were released into the reserve with radio transmitters attached so that MOWS volunteers and BOPRC staff could keep track of them.  Unfortunately the male was hit by a car and killed, near Maketu the following year, but the female is still in the area and appears to be doing well. This is the first time that a bittern has been successfully released into the wild in New Zealand, and is a significant plus for DOC, MOWS and the community.

The reserve is regularly used as part of our education program, and students from the local schools have played a part in planting native species as part of the restoration project, as well as learning about the importance of maintaining areas of wetland such as these.

Little Waihi Estuary is prone to toxic algal blooms and high bacterial loads, which may be attributed to the loss of wetlands in the catchment. The area up stream has been heavily modified for farming and horticulture. There is a need to create more wetlands to filter out the sediment, nutrients and fecal contamination flowing in to the estuary.

This is a long term project, and each year the reserve will become that little bit better, and home to an increasing number of native species.