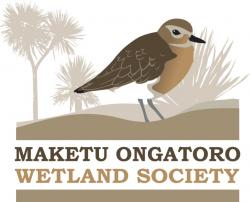 MOWS formed in 2009 as a small community group with the goal of protecting a few tūturiwhatu (northern NZ dotterel; Charadrius obscurus) on Maketū Spit. The species has since become our flagship, and the bird is the central focus of our logo which was designed by Sonia Frimmel.

The wetlands as the background of the beach also signifies the natural linkages between these habitats, and the interconnectedness among the environment. What affects one will affect the other, and our aim is to protect and enhance as much of the natural environment as possible, to not only protect NZ dotterel, but also a range of other birds, plants, reptiles and invertebrates that live here.